As a learning exercise I measured the characteristics of a Triple Tuned Circuit Bandpass Filter in my junkbox. This is a board that came from the now retired kit from the company Kits and Parts.com. This kit is called the multiPig+. Details of this kit can be found in the retired kits section of the aforementioned website. The measurement details are in my notes below. The 40M filter seems to be within spec and was relatively easy to align. Minimum IL = -5.8dB. However the 20M filter was difficult to align as can be seen from the Sweeperino measurements. Try as I might I could not eliminate the 'second hump'. I assume this is one reason why the IL = -9dB.

The experiment also illustrates the utility of the Sweeperino to understand exactly what the filter shape characteristics are in a fast efficient way.

Next I will try to calculate the theoretical IL and BW for a triple tuned circuit and compare the results. 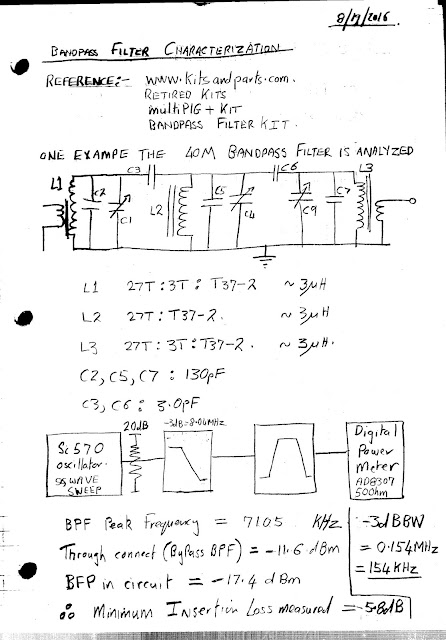 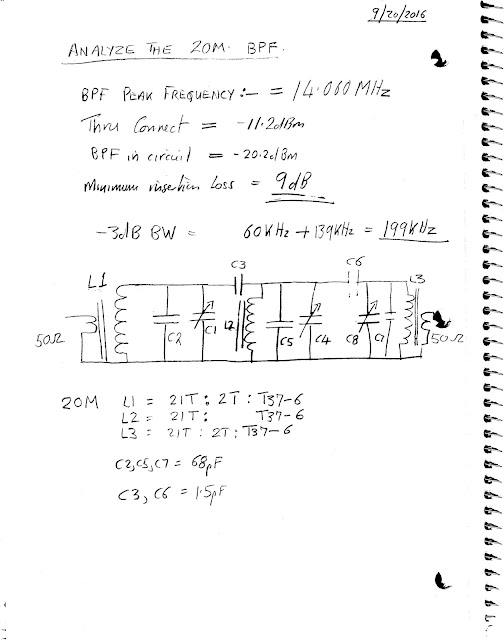 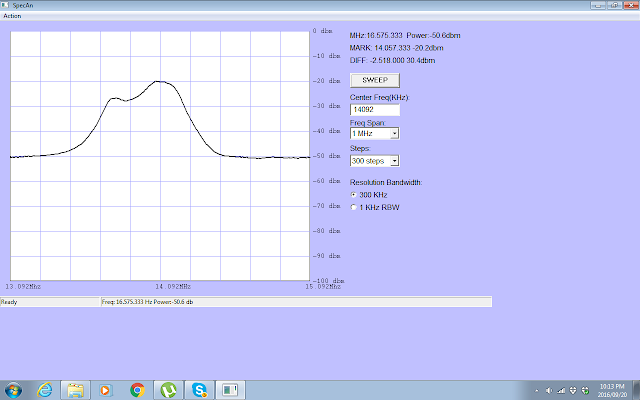 This year at our club, annual pig picking BBQ and show-n-tell I had a chance to borrow the kind services of fellow Knightlites member OM John, KU4AF and his brand new and beautiful digital spectrum analyzer.

Connecting the Si570 based oscillator from my Sweeperino   into the Spectrum Analyzer and measuring the power level of the fundamental frequency we measured a -4dB difference in power when compared to measuring the squarewave on the AD8307 based wideband (~500MHz) Power Meter. Using a Low Pass Filter to filter out the odd numbered harmonics I resolved to measure the power in the fundamental on my work bench.

For the experiment I used the well known 10MHz calibration source as developed by K3NHI. This source can be used to establish the -10dBm point on the power meter through the measurement of a DC voltage level at the DC port. This reference is easy to build and is recommended for any homebrew starting out with a basic 50 Ohm bench.

Indeed my result showed a 4.1dB difference in power reading of the fundamental vs the wideband signal.

Herewith below are my Lab Notes of the procedure adopted. 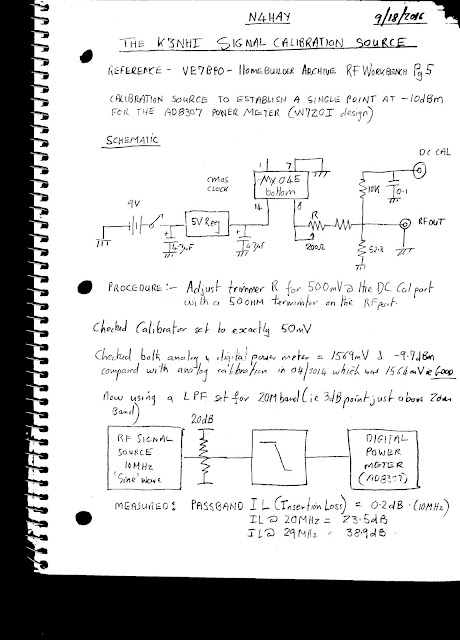 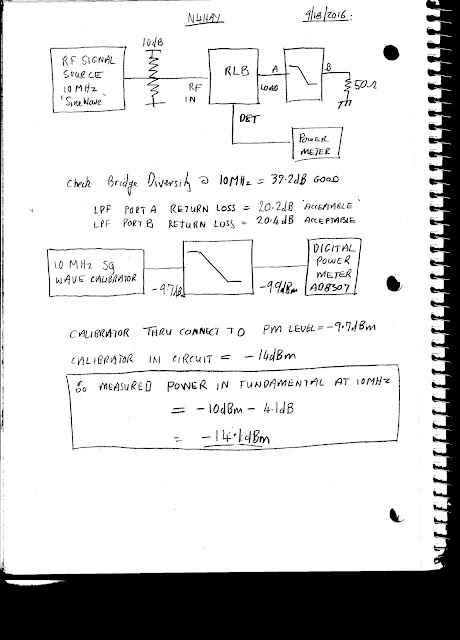 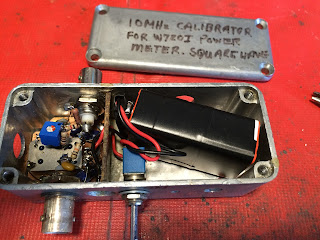 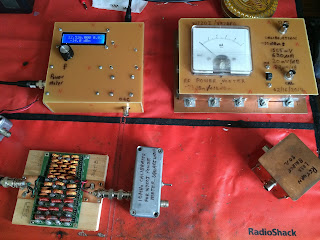 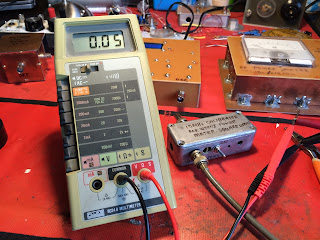 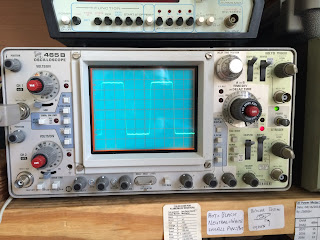 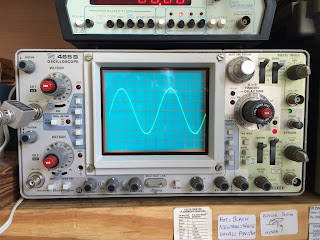 I found an unmarked IF Transformer in my junkbox which seems to have reasonable characteristics for use in my 455KHz IF stage for my shortwave broadcast band radio project. This one had a yellow inductor adjustment screw and a number of 29501 printed on one side. What attracted me to this item was the fact that it had a reasonably high inductance of 91uH on the primary. Thus I could resonate it with a capacitor of approximately 1200pF on 455KHz.  The secondary winding has a very low inductance of 0.34uH. Mysteriously the measured inductances between pin 1-2 and 2-3 of the primary do not add up to the 91uH.

Refer to the attached Mystery IF Transformer Characterization. Using the method outlined by W7ZOI on his webpage The two faces of Q . A Bandwidth of approximately 4.6KHz was measured which pertains to an Unloaded Q = 100.

I next connected the transformer to a 455KHz source, using a 10pF coupling capacitor (Xc = 35K ohms) IF Transformer loaded with Detector circuit. This lightly loaded tank circuit exhibited an open circuit voltage ratio of 15 which increased to 17 when the secondary was loaded with the detector. The 3dB bandwidth was measured as 5.3KHz with the 6dB points at 10KHz. Loaded Q was 86. Thus the Equivalent Loaded Parallel resistance on the tank circuit is approximately 25K ohms of which 35K is contributed from the signal source load (via the 10pF coupling capacitor. Thus the IF Amp collector load can be expected to be in the 20K ohm range.

The small signal voltage swing of 1.86 Vp-p on the tank coil gave a secondary voltage into the detector of 100mV. This is enough to generate an acceptably loud signal into the connected speaker.

Clearly this is not going to be a highly selective Receiver although the first IF transformer should improve the selectivity further.

Next task is to build the cascode IF Amplifier. Lets see how much gain can be achieved from that stage?

Test Fixture showing the IF transformer connected to the Detector stage.

As a part of a project to build a simple shortwave broadcast radio based on the published KD1JV design Steve KD1JDV Shortwave Broadcast Rx the opportunity was taken to perform some measurements of the 'simple' AM envelope detector circuit. Through this exercise I hoped to gain some practical insights into the behavior of diode detectors.

It is clear from my own observations and from reading the literature on the 'simple' diode detector that it is by no means 'simple'! The more one explores and understands the more complex it appeared to me. Especially with respect to the subject of introduced distortion to the input complex modulating waveform.

The test fixture and measurement results are shown here

Some observations as follows:

"So as I'm analyzing my various antennas I understand that my antenna is at resonance when my analyzer reports X=0 for a particular frequency.  But that never seems to be the case outside of my dummy load and even there the reactance is reported as X=7 for 28 MHz.

So is there a rule of thumb for acceptable amount of reactance or some calculation that I can use to determine the loss in DB for a given frequency and the reactance?"

I got to thinking about this. The complex math becomes messy quickly with many possible combinations and permutations if both R and X are allowed to vary for the load impedance ZL. However if one keeps R = 50ohms constant and assume that the source impedance is 50 ohms then the analysis simplifies.

The referenced table shows a range of X values up to 20ohms for a VSWR not exceeding 1.5:1

The ELECRAFT BL2 BALUN Return Loss and Balance were measured as shown in the referenced links. The Balance measurements were performed according to W7EL's referenced document. Refer to pg 163 paragraph named 'Current Balun'.

BALUNS. What they do and how they do it. W7EL

I had some fun measuring the resistance of a linear 10Kohm potentiometer from my junkbox and designated B10K.

I then measured an ALPS 10Kohm pot that is intended for audio applications. P/N RK0971221Z05. The taper for this pot is designated as type 3B by ALPS.