Since I did not have the exact components for the NB6M Miniboots QRP version, I tried adapting the circuit in both the input attenuator and the output filter. I also added a 1N4148 diode to the PA input to prevent negative pulses from possible destruction of the IRF510 MOSFET. I also added a ferrite bead to the Gate input (see comment below).

The NB6M design also calls for a 13 V gate protection Zener. This implementation used a 15 V Zener since that was what I had in stock. This puts the MOSFET in danger of destruction from voltage spikes.

I used combinations of 1/4 watt resistors for the 3 dB attenuator. This is a PI network using 1/4 Watt 10% tolerance carbon resistors with a calculated power dissipation of 744 mW.  I then adjusted the variable pot until I measured a 1:1 VSWR on the input to the Miniboots. The input power was approximately 2 Watts which provided 1 Watt output into the 50 Ohm matched input divider circuit to the PA. (Refer to the schematic below).

A useful further adaptation would be to design a purpose built attenuator with a 33 Ohm output impedance and a 50 Ohm input impedance with attenuation (to be calculated). Further to this thought...the drive power currrently supplied to the PA input (including the 33 Ohm stabilization resistor is approximately 1Watt). With a 12 Volt supply this 'easily' gives +5 Watts output power. For these tests I did not go further than building a standard 3 dB  attenuator. I then adjusted the variable pot to yield a 1:1 VSWR on the input. With this drive level it was clear that the PA was subjected to some unmeasured level of gain compression. When I adjusted the pot for max drive without gain compression, the input VSWR rose to 1.5:1.  I did not want to operate my driver QRP rig into this mismatch for too long since I am still unsure as to how robust it is (this being my W7ZOI universal QRP rig). An option would be an optimized attenuator. Another option would be to add a small amount of regeneration into the emitter of the QRP rig and find other ways to reduce the drive power so that it nicely matches the Mini boots. This would now lead to a new design and thus the Miniboots would no longer be an outboard universal Miniboots...So what is the design objective here at the end of the day? Max efficiency or max utility? It is not possible to have it both ways... Interestingly the approach taken in EMRFD chapter 1 towards building up a transmitter, as a beginner, is to start with an oscillator and then build and match subsequent stages until the desired output power is reached. I have read that in the 'old days' the Old Times would build tube rigs in exactly the opposite direction! This is interesting.

Since I did not have the components in stock to build the specified output filter/matching section I instead built a 'standard' halfwave 7 MHz filter. This has a 50 Ohm input at 7 MHz and 50 Ohm output impedance.

The drain of the IRF510 expects to see an impedance of 12.5 Ohms (P=V^2/2R) for a 12Vdd rail for 5 Watts output power. Thus a 4:1 broadband UNUN transformer was built to perform the impedance transform. This UNUN was tested and confirmed to indeed be providing a 4:1 transformation at 7MHz. See a previous blog write up Label Broadband Transformers.  A ferrite core was used.

The system appears to deliver a clean 5 Watts output however a 'kink' was seen on the gate input and on the drain using my GOS 635 20MHz scope. It is unclear what is producing this kink. Is it the limited bandwidth of the scope or is this symptomatic of some stability issue. Further experimentation required. Clearly the limitation of my 20MHz scope creates some challenges here. A higher speed scope may well uncover further irregularities in the input/output waveforms since it would afford increased X axis resolution. (Refer to the attached scope pics).

According to EMRFD. The output power should increase smoothly as the Vdd is slowly increased. If there are any sudden irregular changes or jumps in output power then this is an indication of instability. An adjustable power supply is required for this test.

It was noticed that the waveform distortion was 'significantly' less after a ferrite bead was added to the gate lead.  Further experimentation needed.

The heat sink consisting of a piece of 2 inch X 1 inch aluminium becomes warm to the touch during normal CW operations but never becomes too hot to touch.

I have made at least 3 dozen QSO's of the rag chewing type with excellent reports received over the past month. One station reported a slow fading of the received signal. However this could have been due to QSB. To be further tested.

Efficiency and more precise measurements still need to be made on this adapted NB6M Miniboots, full gallon QRP Power Amplifier. 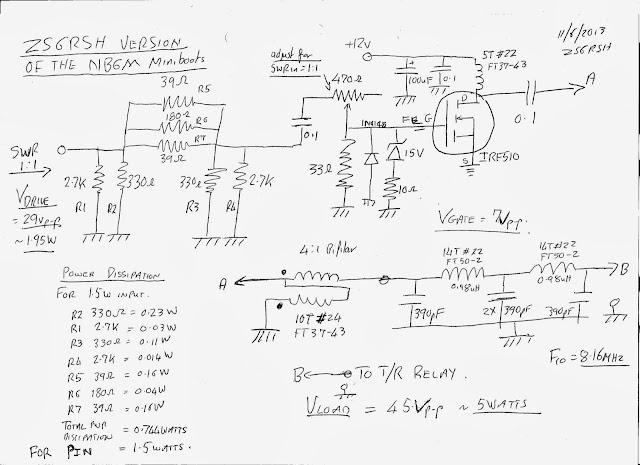